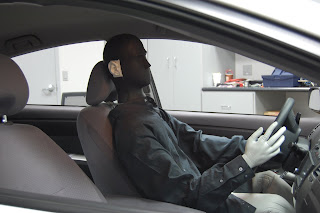 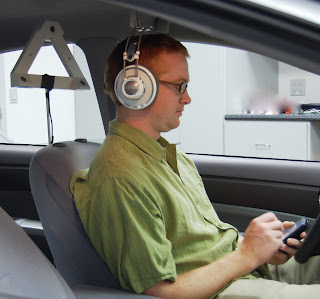 Binaural Room Scanning (BRS) is a powerful audio technology being used by Harman scientists to conduct innovative psychoacoustic research and listening tests that were previously not practical, or even possible. The roots of BRS are traced back to Studer (a Harman International company) who in the late 1990‘s developed a BRS processor that allowed recording engineers to remotely monitor their recordings via headphones through a virtual copy of their control room [1].

BRS measurements of the loudspeakers and listening space are made with an anthropomorphically accurate binaural mannequin equipped with microphones in each ear (see top photo above). Measurements are made at every 1-2 degrees over a range of ±60 degrees by precisely rotating the mannequin's head via a stepper motor controlled by the BRS measurement computer. Each measurement is stored as a set of binaural room impulse responses (BRIR) that provide the filters through which music is convolved and sent to a calibrated pair of high quality headphones (see bottom photo above). A key feature of the BRS playback system is its ultrasonic head-tracker: it constantly monitors the position of the listener's head, sending the angular coordinates to the playback engine, which in turn switches to the corresponding set of measured BRIRs. In this way, the BRS playback preserves the natural dynamic interaural cues, used by humans to localize sound in rooms. Without these dynamic cues, headphones tend to produce sound images localized inside or near the head with front-to-back reversals being quite common. Head-tracking is therefore necessary for accurate assessment of the true spatial qualities of the audio reproduction.

Current and Future Applications For BRS

As a research tool, BRS offers greater efficiencies and opportunities in how audio scientists research, develop and test audio products within home, professional and automotive listening spaces. BRS allows an unlimited number of acoustical variables to be manipulated, sequentially captured, and later evaluated in a highly repeatable and controlled manner. Using BRS, Harman researchers can do perceptual experiments and product evaluations that would otherwise be impractical or impossible using conventional in situ listening tests. This includes double-blind, controlled comparisons of different audio systems in different automobiles, concert halls or arenas, and home theaters.

BRS has already been used at Harman to study how the acoustical properties of the loudspeaker and listening room interact with each other, how these interactions affect the sound quality of the music reproduction, and the extent to which listeners’ adapt to the room acoustics when listening to multichannel audio systems [2],[3]. Over the next few years, BRS will help expand our current scientific understanding of how listeners perceive sound in rooms, so that we can optimize the sound quality of loudspeakers, acoustic spaces, and room-correction devices used to tame loudspeaker-room interactions. A BRS auditory display connected over the internet to a BRS database could even allow consumers to compare and select their most preferred loudspeaker model, concert hall seat, or automotive audio system configuration, without ever leaving the privacy of their home.

Finally, BRS brings enormous efficiencies, flexibility, and cost savings to psychoacoustic research and testing. The acoustical complexity of an automotive audio system can be captured and stored as a relatively small 10 MB file, which can then be emailed and evaluated anywhere in the world using a relatively inexpensive auditory display. The high costs associated with building expensive ITU-R listening rooms, transporting listeners, automobiles, and loudspeakers around the world for evaluation may soon be a thing of the past.

In the next installment, I will discuss some of the inherent errors found in all BRS systems, and how they can be removed through proper calibration. Some recent listening experiments will be described that validate the perceptual accuracy and performance of our BRS system.