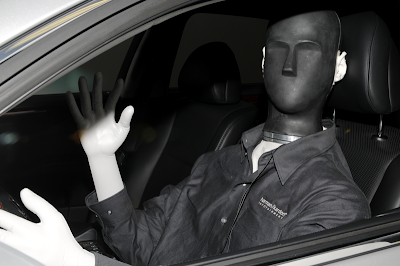 In a previous posting on Audio Musings, I described Harman’s binaural room scanning (BRS) measurement and playback system. BRS is a powerful audio research and testing tool that allows Harman scientists to capture, store and later reproduce through a head-tracking headphone-based auditory display the acoustical signature of one or more audio systems situated in the same or different listening spaces. BRS makes it practical to conduct double-blind listening evaluations of different loudspeakers, listening rooms, and automotive audio systems in a very controlled and efficient way.

I also pointed out that all binaural recording/playback systems contain errors that require proper calibration for their removal. However, removing all BRS errors can become very expensive and impractical, so some compromise is necessary. This precipitates the need to experimentally validate the performance of the BRS system to ensure that the remaining errors after calibration do not significantly change listeners’ perceptual ratings of audio systems evaluated through the BRS system as compared to in situ evaluations.

To this end, Todd Welti, Research Acoustician at Harman International, and I recently presented the results of a series of BRS validation tests performed using different equalizations of a high quality automotive audio system [1]. You can view the Powerpoint presentation of the conference paper here. For more detailed information on this experiment, you can view the proceedings from the recent 36th AES Automotive Conference in Dearborn, Michigan, when they become available in the AES e-library .

To assess the accuracy of the BRS system, a group of trained listeners gave double-blind preference ratings for different equalizations of the audio system evaluated under both in situ (in the car) and BRS playback conditions. For the BRS playback condition, the listener sat in the same car listening to a virtual headphone-based reproduction of the car's audio system. The purpose of the experiment was to determine whether the BRS and in situ methods produced the same preference ratings for different equalizations of the car's audio system.

The listening test results showed there were no statistically significant differences in equalization preferences between the in situ and BRS playback methods. This was true for mono, stereo and multichannel playback modes (see slides 21-23). An interesting finding was that these results were achieved using a BRS calibration based on a single listener whose calibration tended to work well for the other listeners on the panel. This suggests that individualized listener calibrations for BRS-based listening tests may not be necessary, so long as the calibration and listeners are carefully selected. 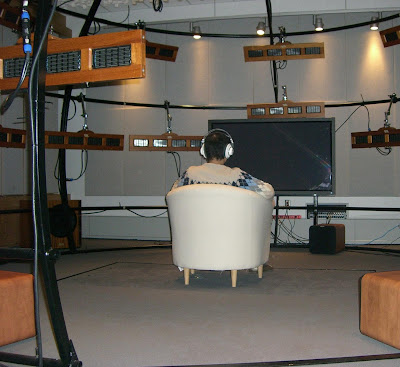 Last week I attended the AES Automotive Audio Conference in Dearborn, Michigan where about 70-odd (pun intended) audio scientists and engineers gathered to discuss the latest scientific and technological developments in automotive audio. A detailed description of the program can be found here.

This article focuses on a paper I co-authored and presented called “Whole-body Vibration Associated with Low-Frequency Audio Reproduction Influences Preferred Equalization" [1]. The work was a joint effort between three researchers, Drs. William Martens, Wieslaw Woszcczyk, and Hideki Sakanashi, from the CIRMMT at McGill University in Montreal, and myself, at Harman International. A copy of our Powerpoint presentation given at the conference can be viewed here.
It is well established that human perception is a multimodal sensory experience [2]. For example, both auditory and visual cues associated with a sound source and its acoustic space are integrated and interrogated by high level cognitive processes that determine our spatial perception of the source based on the plausibility, strength and agreement between the visual and auditory cues. Bimodal sensory interactions have been reported in studies where the video quality of the picture influences listeners’ judgment of the audio system’s sound quality and vice versa (although the audio quality has much less influence on the perceived quality of video than vice versa) [3].
However, little is known regarding how low frequency (below 100 Hz) whole-body vibration produced by the audio system influences our perception of the quality and quantity of bass. Perhaps the most related study is Rudmose’s “case of the missing 6 dB” where the perceived loudness of low frequency signals reproduced through headphones was reported to be approximately 6 dB lower than that of loudspeakers producing the equivalent sound pressure levels at the ears [4]. Rudmose showed that the absence of tactile stimulus in headphone reproduction could, in part, account for why headphones sound less loud than loudspeakers when producing equivalent sound pressure level at the ears (the rest of the missing 6 dB was due to experimental factors, and the increased physiological noise in the ear canal introduced by the coupling of the headphone to the ear).
A Tactile-Auditory Bimodal Sensory Experiment
To shed more light on this mystery, an experiment was conducted at McGill University. A total of 6 trained tonmeisters listened through calibrated headphones to binaural recordings of a virtual high-quality automotive audio system. Each listener adjusted the low frequency boost applied to different multichannel music reproductions according to their taste while experiencing a high and low level whole-body vibration. This was generated by a programmable motion platform driven by the low frequency portion (below 80 Hz) of the music signal. In this way, vibration was delivered to both the feet and body of the listener through the chair (see slide 5). The virtual automotive audio system was based on a binaural room scan (BRS) of the audio system installed in our research vehicle located at the Harman International Automotive Audio Research Lab in Northridge, California (see slide 3). For more information on how BRS works, please refer to my previous BRS blog postings, Part 1 and Part 2.
Whole-Body Vibration Influences Preferred Equalization of the Audio System
The researchers found that the preferred bass equalization of music reproduced through the virtual automotive audio system was significantly influenced by the level of whole-body vibration experienced. While the amount of preferred bass boost varied with music program and listeners, the listeners always preferred less bass for the high vibration condition than for the low vibration one, which was 12 dB lower: on average, listeners preferred 6 dB less bass boost in their headphones moving from the low to high vibration conditions (see slide 10). In other words, there was a bimodal sensory interaction effect between the auditory and tactile senses that influenced listeners' preferred bass equalization of music reproduced through the headphones.
It is important to note that the 6 dB effect reported here may not be the same as observed in an automobile where the level and other physical characteristics of the vibration observed may be different from what was tested here. Under driving conditions, listeners experience additional sources of vibration (and acoustic noise) from the road and engine of the vehicle that may partially mask the whole-body vibration effects produced by the audio system. More research is currently underway to study how real and simulated whole-body vibration in vehicles influences listeners' perception of the audio system and its sound quality.
References
[1] William Martens, Wieslaw Woszczyk, Hideki Sakanashi, and Sean E. Olive, “Whole-Body Vibration Associated with Low-Frequency Audio Reproduction Influences Preferred Vibration,” presented at the AES 36th International Conference, Dearborn, Michigan (June 2-4, 2009).
[2] Multimodal Integration, Wikipedia.
[3] Beerends, John G; De Caluew, Frank E. “The Influence of Video Quality on Perceived Audio Quality and Vice Versa,” JAES, Vol. 45, (5), pp. 355-362 (May 1999).
[4] Rudmose, Wayne, “The case of the missing 6 dB,” J. Acoust. Soc. Am. Volume 71, Issue 3, pp. 650-659 (March 1982)
Share |
Posted by Dr. Sean Olive 6 comments