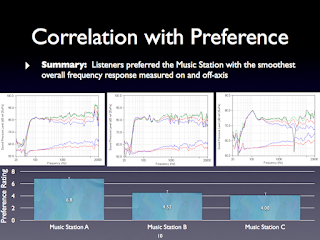 Correlation Between In-Room Measurements and Perceived Spectral Balance: The Influence of Room and Boundary Effects Below 300 Hz
The in-room measurements are plotted in slide 13 along with listeners’ perceived spectral balance ratings. Here, the in-room measurements have been super-smoothed (1-octave) to better correspond to the frequency resolution of the subjective ratings.
Below 300 Hz, there is better agreement between the in-room measurements and listeners’ spectral ratings than observed using the anechoic measurements (slide 11). However, above 300 Hz, there is generally better agreement between the anechoic measurement and spectral ratings, particularly using the listening window curve that represents the direct sound. This confirms the important role that the direct sound plays in our perception of reproduced sound. Below 300 Hz, the room’s standing waves and boundary effects play a dominant role in the quality and quantity of bass we hear. Previous studies [5] have shown bass quality accounts for 30% of listener preference, and cannot be ignored.
Dynamic Compression Measurements
Our scientific understanding of the perception and measurement of nonlinear distortions in loudspeakers is still quite poor. There are currently no standard loudspeaker measurements that adequately capture the perceptual significance of dynamic compression and the associated distortions it produces. This is an area of audio that is in need of more research.
Listeners reported that Music Station A had fewer audible nonlinear distortions than the other two Music Stations. However, it was not clear if the distortions were real or due to a cognitive bias known as the “Halo effect.” Examining the objective distortion measurements will hopefully clarify what is real and not real.
The dynamic linearity of the Music Stations was tested by measuring their anechoic frequency response at different playback SPL’s from 76 to 100 dB SPL (@ 1 meter distance) in 6 dB increments. A relatively short length 4 s log sweep was used as a test signal to minimize the thermal effects on the transducers. Consequently, the measured dynamic compressions shown below were largely related to the behavior of the electronic limiters in the Music Stations, designed to prevent the amplifier clipping, which could otherwise potentially damage the transducers.
Slide 16 shows the dynamic compression for each Music Station. The frequency response measured at 82, 88, 94 and 100 dB SPL’s have been normalized to the 76 dB measurement. Any dynamic compression effects would be exhibited as a deviation from 0 dB. In examining these graphs, Music Station A produced 6 dB more output (100 dB @ 1 meter) than the other Music Stations without significant compression effects.
On the surface, the relationship between these measurements and listeners’ distortion ratings seems to be straightforward: the Music Stations with the higher amounts of compression received lower distortion ratings (slide 17). However, the SPL’s at which the compression effects occurred (> 94 dB) were higher than those used in the listening test.

Conclusions
This article has shown evidence that a combination of comprehensive anechoic and in-room measurements can help explain listeners’ preferences and spectral balance ratings of the Music Stations evaluated in controlled listening tests.
Above 300 Hz, the anechoic derived listening window curve correlated well with listeners’ spectral balance ratings, whereas the in-room measurements better explained the Music Station’s acoustical interactions with the room below 300 Hz. In these particular tests, the overall smoothness of the on and off-axis frequency response curves provided the best overall indicator of listeners’ preferences and their comments.
Dynamic compression measurements revealed significant differences among the Music Stations in terms of their linear SPL output capability. The most preferred Music Station could play 6 dB louder (100 dB SPL @ 1 meter) than the other units without exhibiting significant dynamic compression. It is unlikely that this was a factor in the listening tests since the units were evaluated at a comfortable average level of 78 dB (B-weighted, slow). Finally, distortion measurements revealed some differences among the products but had no clear correlation with listeners’ sound quality ratings. This highlights the need for further research into the perception and measurement of nonlinear distortion in loudspeakers so that loudspeaker engineers can optimize their designs using psychoacoustic criteria.
References
[1] Floyd E. Toole