This past week I had an enjoyable time meeting well-known technology writer Robert Scoble who was visiting our Harman facilities in Northridge, CA along with his geek-in-command Sam Levine. As part of the tour, I showed  them our Reference Listening Room and Multichannel Listening Lab where we do product research and double-blind evaluations of loudspeakers. We discussed the science and philosophy behind how we design and measure the sound quality of our products.

One of the topics of discussion was my recent research that explores whether high school and college students from USA and Japan have different tastes and preferences in the quality of reproduced sound compared to older trained listeners.  We talked about differences in the tastes and performances of trained versus untrained listeners, and how Harman is able to accurately predict  subjective preference ratings of loudspeakers based on a predictive model that analyzes a set of comprehensive anechoic measurements.

After running Robert and Sam through a few trials of listener training using  our software "How to Listen", I decided to put them through a couple of double-blind listening test trials to see if they had the right stuff. They compared four different brands of floor-standing loudspeakers located  behind an acoustically transparent, visually opaque curtain where each loudspeaker is shuffled into the same position via an automated speaker shuffler. All of our tests are conducted double-blind because we have found that even trained listeners are influenced by nuisance variables such as brand, price, size, etc.

In these tests Robert and Sam heard the same four loudspeakers that have been evaluated previously by hundreds of untrained listeners including young, old, American, Asian, and European listeners, whose preferences and performances were compared to those of our panel of trained listeners. From these tests, we have found evidence that most listeners prefer the most accurate, neutral loudspeaker regardless of age, culture or listening experience.

When the listening trials were done, the curtain went up, and Robert and Sam were surprised to discover their favorite choice was the most accurate loudspeaker which was the least expensive. The science works.  One of the speakers Robert didn't like was a model that he actually owned: it had excessive amounts of treble and upper bass, which I'm told is mandated by the manufacturer's marketing department who believe that "boom and tizz" are what their customers want. Luckily, I haven't met many of their customers, yet. Robert, then surprised me by turning on his camera doing an impromptu interview, which hopefully you'll enjoy. If you want to learn more about the engineering process and tools behind designing a speaker, check out the interview with one of our speaker engineering stars, Charles Sprinkle.

In my next blog posting I hope to discuss some of the exciting research we've been doing on the relationship between the perception and measurement of headphone sound quality. The goal is to develop the same science for measuring and predicting the sound quality of headphones that we've found useful for designing good sounding loudspeakers.  Stay tuned!

Geoffrey Morrison, an audio writer at CNET and Sound & Vision has posted a nice summary  of my latest AES paper "Some New Evidence that Teenager and College Students May Prefer Accurate Sound Reproduction" presented at the recent  132nd AES Convention in Budapest, Hungary.


The paper is available for download here at the  AES E-library, and I have provided a YouTube video and a PDF of my presentation slides that summarize the main points of the research.


The abstract of the paper reads as follows:


A group of 58  high school and college students with different expertise in sound evaluation participated in two separate controlled listening tests that measured their preference choices between music reproduced in (1) MP3 (128 kbp/s) and lossless CD-quality file formats, and (2) music reproduced through four different consumer loudspeakers. As a group, the students preferred the CD-quality reproduction in 70% of the trials and preferred music reproduced through the most accurate, neutral loudspeaker. Critical listening experience was a significant factor in the listeners’ performance and preferences. Together, these tests provide some new evidence that both teenagers and college students can discern and appreciate a better quality of reproduced sound when given the opportunity to directly compare it against lower quality options. 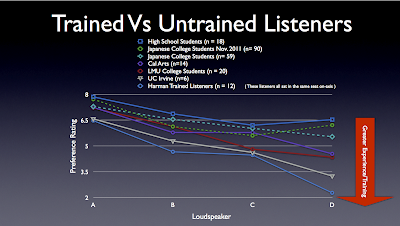 Not surprising, (at least to me) I found that the Japanese college students on average preferred the same accurate loudspeaker (A) as did the 58  Los Angeles students, and the trained Harman listening panel. The main differences among the different listening groups  were related to the effect of prior critical listening experience:  the more trained listeners simply rated the loudspeakers lower on the preference scale, and were more discriminating and consistent in their responses. This result is consistent with previous studies. The least preferred and least accurate loudspeaker (Loudspeaker D) generated the most variance in ratings among the different listening groups. This  was explained by its highly directional behavior combined with its inconsistent frequency response as you move from on-axis to off-axis seating positions. This meant that listeners sitting off-axis heard a much different (and apparently better quality) sound than those listeners  sitting on-axis.


While the small sample size of listeners doesn't allow us to make generalizations to larger populations, nonetheless it is reassuring  to find that  both the American and Japanese students, regardless of their critical listening experience, recognized good sound when they heard it, and preferred it to the lower quality options.


It would appear that the reason kids don't own better sounding audio solutions has nothing to do with their supposed "deviant"  tastes in sound quality, but more do with  other factors  (e.g. price, convenience, portability, marketing, fashion) that have nothing to do with sound quality.  Music and audio companies should take notice that kids can indeed discriminate between good and bad sound, and prefer accurate sound, despite what the media has been falsely reporting for the last few years. With that out of the way, we should focus on figuring out how to sell sound quality to kids at affordable prices and form factors  they desire to own.


The research suggests that if we cannot figure out how to sell better sound to kids, we have no one to blame but ourselves.