The Subjective and Objective Evaluation of Room Correction Products 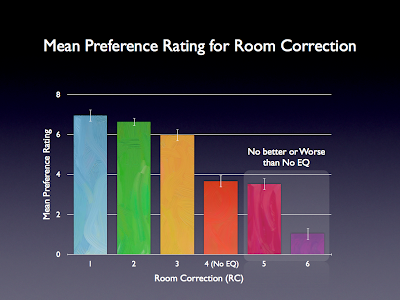 In a recent article, I discussed audio’s circle of confusion that exists within the audio industry due to the lack of performance standards in the loudspeakers and rooms through which recordings are monitored. As a result, the quality and consistency of recordings remain highly variable. A significant source of variation in the playback chain occurs from acoustical interactions between the loudspeaker and room, which can produce >18 dB variations in the in-room response below 300-500 Hz.

To answer these questions, we conducted some double-blind listening tests on several commercial room correction products [1]. I recently presented the results of those tests at the 127th Audio Engineering Society Convention in New York. A copy of my AES Keynote presentation can be found here.

A total of three different commercial products were compared to two versions of a Harman prototype room correction that will find its way into future Harman consumer and professional audio products. The products included the Anthem Statement D1, the Audyssey Room Equalizer, the Lyngdorf DPA1, and two versions of the Harman prototype product (see slide 7). Included in the test was a hidden anchor: the same loudspeaker and subwoofer without room correction. In this way, we could directly compare how much each room correction improved or degraded the quality of sound reproduction.

A total of eight trained listeners with normal hearing participated in the tests. Using a multiple comparison method, the listener could switch at will between the six different room corrections, and rate them according to overall preference, spectral balance, as well as give comments (see slide 14). The administration of the test, including the design, switching, collection and storage of listener responses, was computer automated via Harman’s proprietary Listening Test Software. A total of nine trials were completed using three different programs repeated three times. The presentation order of the program and room corrections was randomized.

Correlation Between Subjective and Objective Measurements

In-room acoustical measurements were made at the six listening seats using a proprietary 12-channel audio measurement system developed by the Harman R&D Group. Slides 23 and 24 show the amplitude response of the different room corrections spatially averaged for the six seats (slide 23), and at the primary listening seat (slide 24). The measurements are plotted from top to bottom in descending order of preference, each vertically offset to more clearly delineate the differences. A few observations can be made:

More tests are underway to better understand and, if necessary, optimize the performance of Harman's room correction algorithms for different acoustical aspects of the room and loudspeaker.